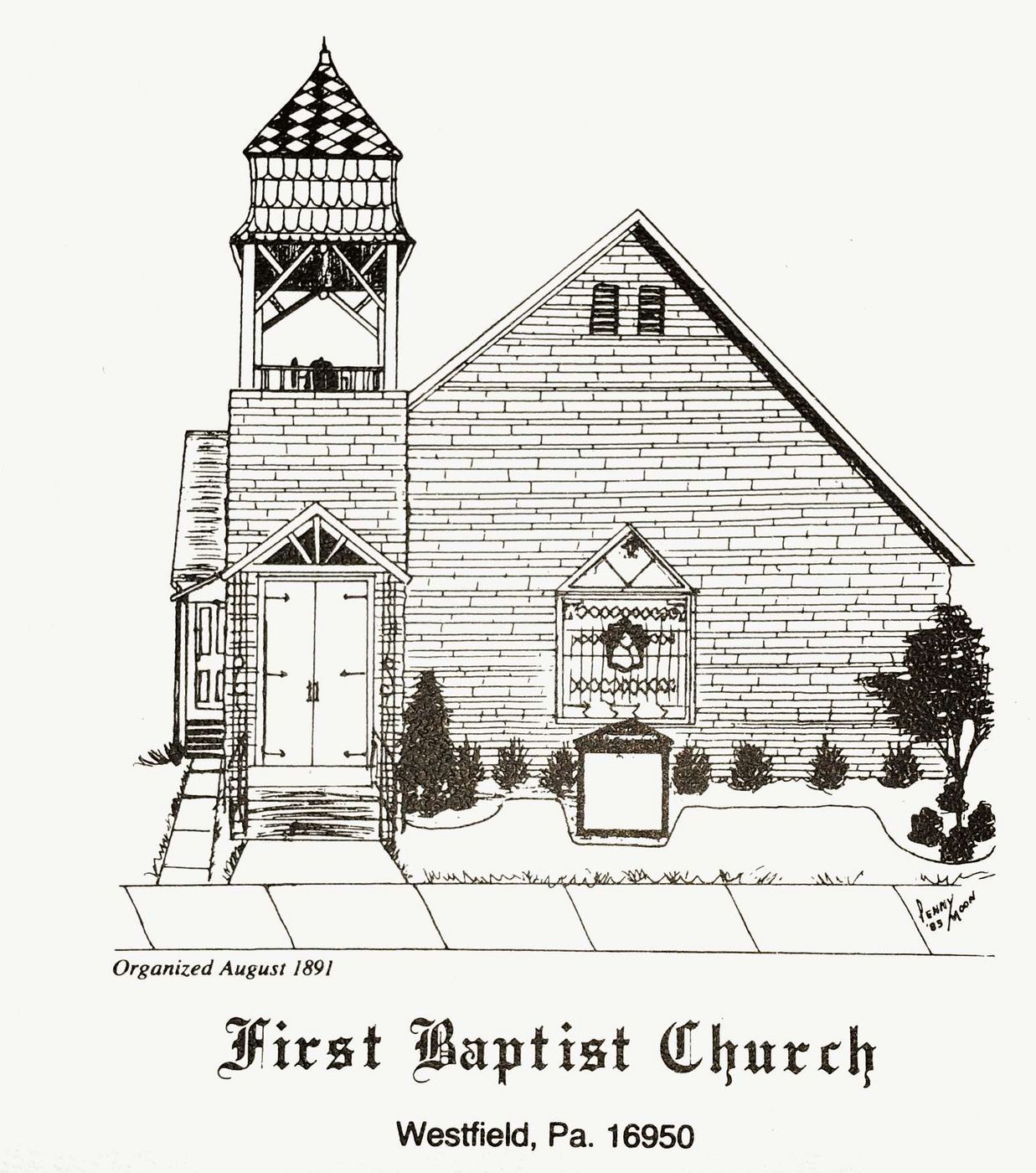 The First Baptist Church of Westfield located at 122 Church Street is one of several in the heart of downtown Westfield. We are a neighborhood church celebrating over 100 years of being in the community and within walking distance from many of the church members’ homes. This rural community with an approximate population of 1,064 is located in the northwestern corner of Tioga County, Pennsylvania, not far from the New York State line and in the center of some of the most beautiful Pennsylvania open country and state game lands.

August 5, 1891, Rev. A.W. Metler was the first pastor and Mrs. S.M. Cotrell organized the church in her home. Metler in an early speech said, “The congregation is in good spiritual and working condition, but are somewhat poor financially. The church is located in a thriving town of about 1,200 inhabitants, centrally located in the beautiful valley. Ours is the fifth and last church organization, all of which are weak excepting one. There is plenty of material to work on without infringing on other denominations. The church is four miles from any other Baptist Church. It is a very important point to occupy, not only because of the place itself, but also from its relation to the Baptist cause in this region. There is urgent need of a strong church here. In some respects it is a very difficult field to work, but we believe, if wisely handled, someday it will abundantly repay for all expenditure and struggle. The church has gained a warm place in the hearts of the people, and it's well respected by most of the other denominations. We worship in a hall centrally located. We have a thriving Sunday School, a prosperous BYPU and ladies Auxiliary. With God’s blessing we expect the little one will soon become strong.”

In 1901 they voted to buy the current lot on Church Street and started discussing building the church in 1905. In 1908 the new building was erected and on August 20, 1908, the church cornerstone was laid. Memorial stained glass windows arrived and still grace our windows. The first pews were installed December that year and the building was dedicated January 14, 1909, with the mortgage being burned in 1920.

With the growing Sunday School, our church built an addition in 1926. The church bell arrived in 1938 from the Sylvester Baptist Church.

In 1954 the church split with, and in 1955 a new purpose was stated, “The purpose of this Church shall be to meet together to worship God and for spread of the Gospel throughout the world and the evangelization of the world.” In 1998 the focus statement, “God calls us to communicate and model the Holy Bible and its applications” was developed.

In 1961 the outdoor bulletin board was installed. In 1981 the church cornerstone was opened as a new front of four inch thick Pennsylvania stone was installed over the church. In 1990 the steeple was enclosed.

In 1955 member Lewis George was licensed to preach in our church and in 1982 both members Tim Hall and Richard Berg were ordained. Our church has had 40 pastors throughout the years filling the pulpit. Some of these were supply pastors filling in as interim pastors as long as two years. Others made contributions such as flock bible studies, constitutions or focus statements. We have many, many years of solid church service passed down to us to draw from in terms of faithful, strong Christian values and instructions. Although we are small, we continue to hold fast to our doctrines and our beliefs. In 2002 member Mike Hale was given a certificate to preach by the church and adds to our pulpit supply as well as other local congregations in time of need.

Our current staff consists of Pastor Sean Grossman and organist Walter Sergeant. Our previous pastor, F. Lewis Young, was with us from November 6, 2005, until August 1, 2013, when he decided to retire. Pastor Young was called after a search period time when Pastor Birney Phillips retired May 29, 2005. Pastor Phillips had started November 28, 1999. Prior to that, Rev. Leal Smith was with us April 28, 1996 to October 25, 1998 when he resigned. During the time between each calling, we were served with interim pastors from the local area. After Rev. Smith left we utilized the Minister At Large program for a time.

Presently, we celebrate the Advent and Christmas seasons, the Lenten Season is acknowledged, Easter celebrated and Pentecost recognized. We also celebrate the Lord’s Supper every other month with home communion offered to our shut-ins under the pastor’s direction. Our church has held Vacation Bible Schools, yet since 1998 we have participated in a community VBS hosting on a rotational basis with other churches in town. We also have headed a community Thanksgiving meal since 1993.